Make Your Own Sofa Table

“Would you be interested in a dark-blue leather sofa?” my friend asked. She planned to feature neutral earth tones in the home she was building, and navy wasn’t one of them. You bet I was interested! The color perfectly matched two La-Z-Boy recliners someone else had given me. 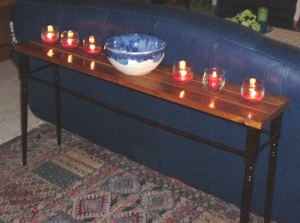 Untreated cedar decking boards and old stair balusters were the main materials used to make the sofa table. I already had the doweling, L-brackets, screws, wood glue, and red-mahogany stain. The only extra expense was lighter stain for the tabletop.

After the new sofa arrived, I dragged my old beige hide-a-bed out to the garage and came inside to collapse. While snuggled on the comfy new piece, a thought hit me. Wouldn’t a sofa table behind it be lovely? I envisioned candles, maybe a lamp, or a copy of The New Dictionary of Cultural Literacy lying casually on its side . . . .

I jumped up and searched the Internet for sofa-table prices, but what I found made me want to collapse again. Two hundred dollars or more for four long legs with a board on top? Maybe pushing the beige hide-a-bed around had made me delusional, but I began to wonder how hard it would be to construct my own.

I was still thinking about it when Jennifer’s family came for a visit. “Look what I brought you,” she said, unloading a bundle of old wooden stair balusters. Her husband had been about to throw them out, but she figured I could find a use for them. I stowed the bundle in the rafters next to some spare lumber and turned my attention to the door between my family room and garage. A previous owner had cut a pet door into the dark brown, 1-3/4-inch-thick particleboard, but the front of the pet exit had since been lost. And with the hole cut in it, the ugly house door no longer met local fire codes, either.

Fortunately Jennifer is a Fiercely Frugal Shopper. At a building-contractors’ garage sale, she’d picked up a white paneled door for me for $5.00. I propped the old brown one against a fir tree in the front yard and tacked on a huge “Free” sign. Nobody succumbed to the temptation, and the brown monstrosity was still there two days later. What would I do with it now?

I pulled out a circular saw and asked my houseguests for help in cutting a section of the door to 10 inches by 48 inches, the size of the sofa table I envisioned. I also explained my idea of using chopped-off balusters as legs. Instead of hooting with laughter, they graciously taught me how to drill holes of the proper diameter and depth to insert the balusters’ pegs into the underside of the tabletop.

I cut several inches off the bottom of each stair baluster in order to make the sofa-table legs.

When the lesson was over and everyone went back home, I continued the project in spare moments. It took two months to learn by trial and error what worked and what didn’t.

Attempt #1: I suppose everyone was too polite to tell me, but particleboard from a solid-core door is way too heavy for a skinny tabletop, especially if all you have for legs are spindly stair balusters. Your table simply won’t stand up long enough for you to walk away from it, let alone hold up anything as substantial as a candle or a book.

Attempt #2: Next I looked through my lumber collection and seized upon some wood from the side of a shipping container. I cut it to size, sanded it, drilled holes in the proper places, and tried to stand it up on the legs. Unfortunately the wood was warped, and nothing I could do would straighten it. I’ve seen whimsical furniture pieces that were meant to be twisted, but I had no idea how to adjust the legs so they’d all touch the floor at the same time. Reluctantly, I gave up on that idea.

Attempt #3: I removed three cedar decking boards from my lumber stash, cut them to length, and glued them together to form a tabletop. The ends of the boards looked unfinished even after sanding and staining them. So I peeled veneer from the edge of the old door, glued it to the table-top ends, and trimmed it with a pocketknife. Of course, you can also purchase veneer for this purpose in handy peel-and-stick strips, but I was being frugal.

This tabletop attempt had promise, but the wimpy balusters still needed better support. I looked on the Web to study table designs instead of just prices, and using drill bits that matched the diameter of the doweling, I drilled holes in the legs a couple of inches below the top, deep enough to insert dowels. I was careful to offset the holes for the short and long dowels so the dowel-ends wouldn’t get in each other’s way when they were inserted at different angles.

Then I whittled and sanded everything to fit and braced the underside corners with L-brackets from coffee-tin organizers in the garage. Next, I thickly brushed the legs and doweling with two coats of deep-red mahogany stain, and on my next trip to a liquidation store, purchased a quart of Puritan Pine stain for the top, my only out-of-pocket expense.

I’m very pleased with the results and the savings. As for the level of craftsmanship, let me just say that wood putty is a wonderful invention for filling all the holes that one may have drilled in error. Sure, the table fits against the sofa better in one direction than the other, and one of the dowels is a little crooked. But so far, none of my visitors have stopped oohing and ahhing long enough to mention either of those irregularities.

I’ve always been an advocate of the philosophy that something is better than nothing. Since I didn’t have $200 to spend on a sofa table, I figured I had nothing to lose by trying to make my own. Even if you’re not in the market for a sofa table, I hope my intrepid journey into the world of furniture making gives you courage to try a similar project of your own. After all, as The New Dictionary of Cultural Literacy reminds us, “Nothing ventured, nothing gained.”

This entry was posted in Décor on a Dime and tagged crafts, creative solutions, trash to treasure. Bookmark the permalink.

1 Response to Make Your Own Sofa Table